“Blessed are the peacemakers, for they will be called children of God.” (Matthew 5:9, NRSV)
The result of the plebiscite in Colombia was a powerful blow to our desire for a quick peace. However our longing for peace is strengthened once again in community along with increasing voices saying Yes to peace and reconciliation!

President Santos stated that he “will maintain the bilateral ceasefire and seek peace until the last minute of his term,” and likewise Rodrigo Londoño Echeverri, on behalf of the FARC-EP in their transition to civilian life, stated their resolve to “use only words as weapons for building the future” and to stick to the peace accord. On the other side, those who promoted the No vote called for a National Pact.

We have heard the victims of the war and their families, many of them from churches, crying out for peace with justice; and hoping that this possible National Pact not only be between political elites. They call us to continue being yeast so that together victims organizations and churches we demand to be included in the pact that must be ethical and preserve the rights to truth, justice, reparations and guarantees of non-repetition of violent acts that had previously been achieved.

We believe that this moment is an opportunity to create the National Political Pact where victims organizations, churches, faith based organizations and social movements be taken into consideration during the implementation of the final peace accord already signed by the Colombian government and the FARC-EP in transition to civilian life. There is also now an extraordinary opportunity for the National Liberation Army – ELN to participate in this National Pact, adjusting it to the agenda that has been agreed upon between the Colombian government and the ELN guerrilla.

The Interchurch Dialog for Peace, DIPAZ, maintains it commitment to truth, justice, nonviolence, antimilitarism and reconciliation. We will continue to monitor the bilateral ceasefire and cessation of hostilities and restate our commitment to seeking the durable and stable peace that has already been agreed to by the Government of Colombia and the FARC-EP in transition to civilian life.

We reaffirm the need to continue to do pedagogy of the Final Peace Accord in a way that is accessible to all people ensuring their right to access information and through that to exercise their right to making informed decisions. This commitment is based on the reality that no political party got a majority in the plebiscite, as more than 60% of Colombian voters did not vote.

We maintain our hope and trust in the future, facing the current context of Colombia as a new opportunity to facilitate difficult and improbable -but necessary- dialog, which is needed to guide our society to a stable and lasting peace. 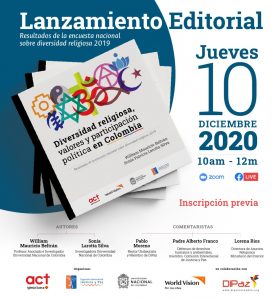 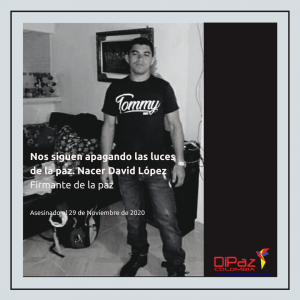 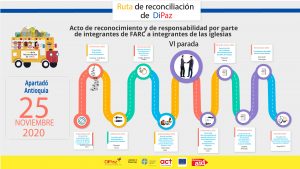